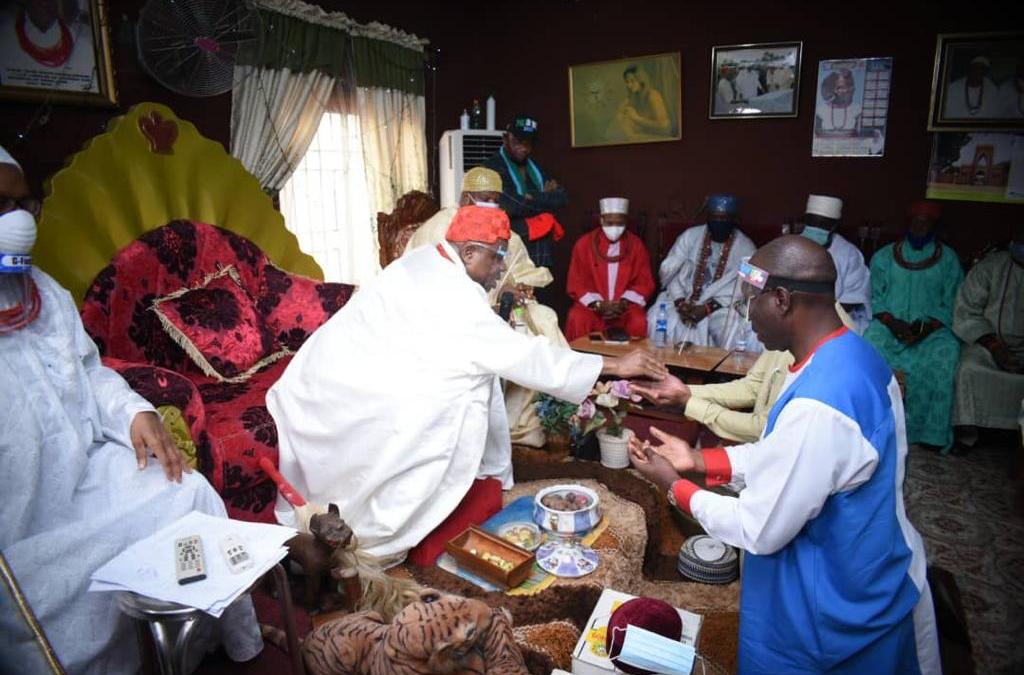 The candidate of the All Progressives Congress in the Edo Governorship election, Pastor Osagie Ize-Iyamu, has vowed to empower and harness the agricultural potentials of Edo Central, Esan land, if elected as the Governor of Edo State on the 19th of September.

In Igueben LGA, Pastor Osagie Ize-Iyamu and his running mate, Mallam Gani Audu, alongside other party leaders including former Governor of the State, Comrade Adams Oshiomhole, paid homage to the Onojie of Igueben Kingdom, HRH Ehizogie Ailuojerio I, in his palace and obtained his blessings.

Pastor Ize-Iyamu lamented the exclusion of traditional rulers in governance and promised to partner with the traditional institutions in the state to tackle the problem of insecurity and develop policies and measures that would address the real needs of the people, including easy and secure access to rural farmlands.

He accused the incumbent Governor Godwin Obaseki of running with a deceitful ‘Esan Agenda’ as a ploy to gain sympathetic votes, stating that the Governor’s actions in the last four years have brought no development to the Esan people.

According to him, Governor Godwin Obaseki overlooked the Esan people when presented with opportunities to include them in his administration and campaign, citing the replacement of his former Chief of Staff, Taiwo Akerele, and the appointment of his campaign DG with people from Edo South where he also hails from.

Ize-Iyamu assured the people of his plans to harness the agricultural potentials of the region through partnership with rural farmers to improve their harvest yields and provide ready local and foreign markets for their produce.

On his part, Comrade Adams Oshiomhole, who was received with loud cheers from the crowd, said Governor Godwin Obaseki failed to continue with his administrative style of implementation of plans and visible execution of projects that provide relief to the people. Instead, he said the incumbent Governor wasted state resources on consultants and MOUs that failed to translate into any meaningful achievement.

He urged the people of Esan to vote en masse for Pastor Osagie Ize-Iyamu and expressed confidence that his SIMPLE agenda is an original and creative manifesto that contains realistic plans on how to move Edo State forward.