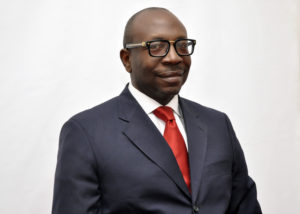 Children are the very first victims of misgovernance and inadequate implementation of government policies, a People’s Democratic Party, (PDP) governorship aspirant, Pastor Osagie Ize-Iyamu has observed.
Addressing a large crowd of children which visited him during the week in Benin as part of their activities to mark the Children’s day, the PDP front line aspirant in the September 10 governorship election, made the observation as part of his message to all Nigerian children as they celebrate ‘Children Day’ today.

He pointed out that it was the responsibility of the government to ensure that the future of children was protected and secured through adequate welfare packages and encouragement of entrepreneurship for workers and jobless adults who were their parents and guardians.

“Any government, no matter the level of infrastructural development it undertakes, which fails to capture, through adequate policies, the welfare and growth of children to adulthood as the future leaders is doomed”, he said.
Ize-Iyamu noted that the provisions in the fundamental objectives and directive principles of states policies in the Nigerian constitution which specified goals to be met in achieving programmes which would go a long way in securing the welfare of children or under aged, regretted that the present Edo state government has done little or nothing in this direction.

He expressed deep disappointment that the Edo state government could not provide adequate clean and drinkable water for children let alone other desiderata. What the government failed to realized, he pointed out, was that Nigeria’s future rested on the school bench. ”All government policies should take adequate cognizance of the need to continue with vigor to provide for the welfare of the Nigerian child with affordable and qualitative education”.
Despite the harsh realities of the present Nigerian economy, he advised parents and guardians as the first custodians of children to instill moral discipline in them so that they could become useful members of the society.
Responding on behalf of the children, Mr Osaretin Iredia who described himself as a proprietor of a private school, said that they were optimistic that when Ize-Iyamu becomes governor children would in practical terms benefit from his campaign slogan: `the future is now`.