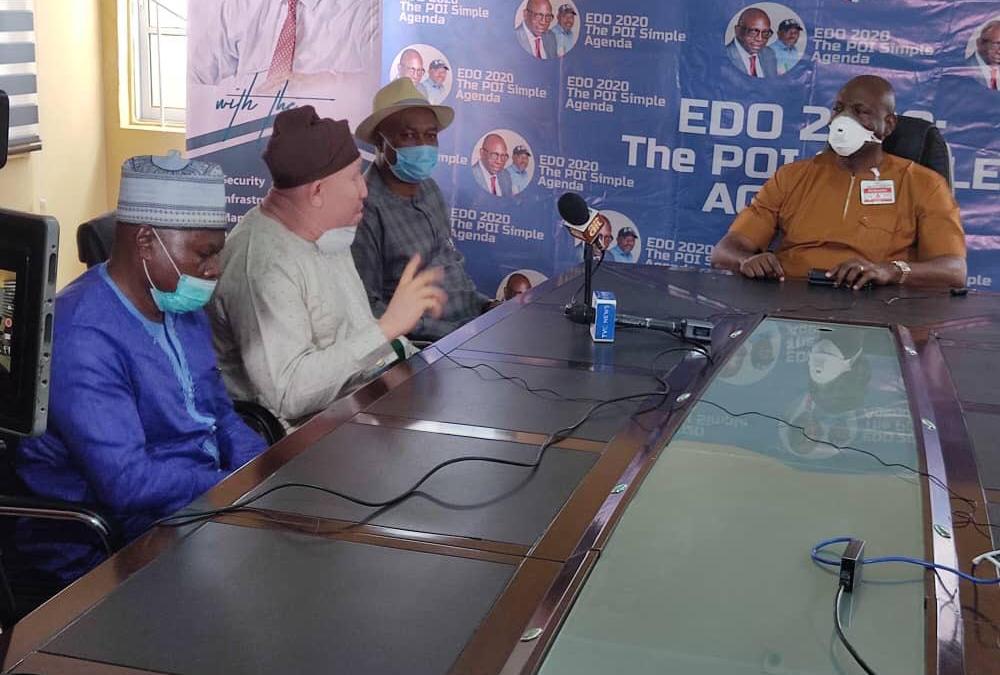 The Commissioners representing the three Senatorial Districts of Edo State in the Edo State Oil Gas Producing Area Commission (EDOSOPADEC) who announced their resignation on Monday have paid a visit to the candidate of the All Progressives Congress, Pastor Osagie Ize-Iyamu at his campaign office in Benin where they pledged their solidarity and condemned Governor Godwin Obaseki for his deception, fraud, and lack of empathy.

At the meeting, Prince Emmanuel Odigie of Edo Central Senatorial District, Rilwanu Oshiomhole of Edo North, and Osamwonyi Atu of Orhionmwon all jointly condemned the Obaseki-administration for disempowering the Commission with the incessant diversion of funds meant for projects.

Prince Emmanuel Odigie of Esan land, Edo Central accused the Governor of being dangerously over-ambitious and without love or empathy for those he was elected to lead. He criticized Mr. Godwin Obaseki’s repeated threats to ‘crush’ anyone not supportive of his personal political choice and victimization of elected officials who have refused to join him in the PDP as a vicious display of tyranny detrimental to growth and development.

He also said the Governor’s touted ‘Esan agenda’ is a deceitful plan designed only to obtain votes.

“Which Esan person has he empowered in his government or given relevance? All his promises to the people have gone unfulfilled. Instead of focusing on governance, he is doing everything to bring every Edo person down. The people of Esan can see through the ruse and deception,” he said.

Osamwonyi Atu of Orhionmwon lamented the lack of development in the region despite its status as a major oil-producer in the State. He expressed regret working for Governor Godwin Obaseki, stating that his resignation and resolve to back the bid of Pastor Osagie Ize-Iyamu is borne from the desire to put an end to Obaseki’s non-performance and vindictive governance.

Rilwanu Oshiomhole of Edo North also criticized Obaseki’s castigation of individuals instead of focusing on governance and policies, stating that his administration has abandoned the people.

On his part, Pastor Osagie Ize-Iyamu, while receiving them, described their courageous resignation as a “milestone in the journey to move Edo state forward, change the present deceitful government, and install a government that will truly represent the people.”

He said the present situation in the State where people are abandoning the Government in drove, as opposed to the familiar event of jostling for appointments, is an indication that Mr. Godwin Obaseki has failed and is set for an embarrassing defeat at the polls on the 19th of September.

In his words, “I salute the courage of these men who heeded the call of their conscience and placed their integrity over office to resign from a government that is insincere, fraudulent, and deceitful.”

“I know that in their usual practice of castigating and smearing the image of people not supportive of their plan to foist themselves on the State for another term, the State Government will likely commence the spread of baseless reports claiming that these men were induced to make the decision they made.”

“But as they can testify to everyone here, this is the first time I am meeting with them in a long while. Their decision to resign was made on their own accord based on their integrity and unwillingness to be a part of a government without profitable plans for their people.”

“I thank Prince Emmanuel Odigie for the revelations he has made today, especially on the deceitful ‘Esan agenda’ that the incumbent is bandying. A governor that does not respect the Esan people or empower them, is that the Governor who will hand over power to them?”

Pastor Ize-Iyamu promised to work with the former Commissioners as they, on their part, also vowed to reveal more facts about the fraudulent ways of the incumbent Governor.