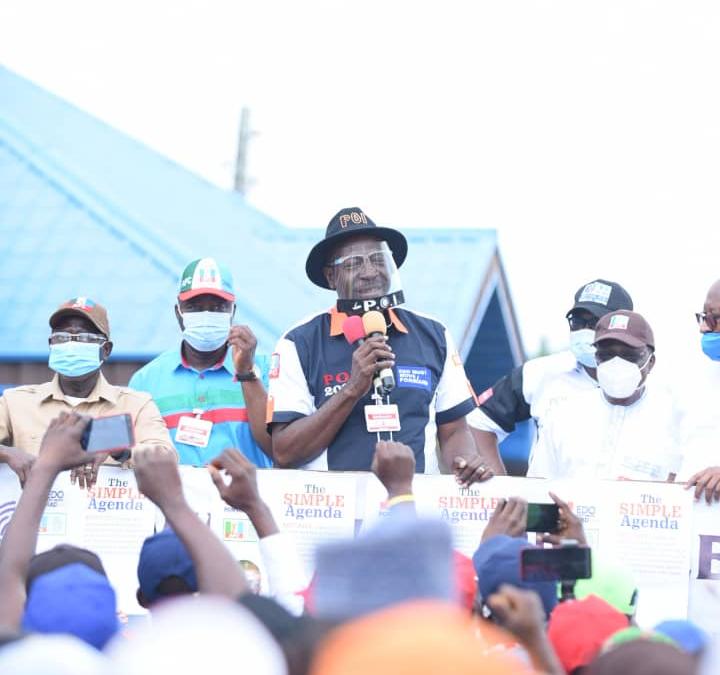 He also promised to partner with Edo traditional rulers to secure the lives of Edo people, particularly in the rural areas.

“We are going to repair the relationship between the state government and the traditional rulers, as well other community-based leadership, closest to the people,” he promised.

While condemning Obaseki’s poor relations with Edo royal fathers, Pastor Ize-Iyamu hailed the fathers’ rural vigilante efforts, and pledged to enter into government partnership with them to secure the Edo royal folks, as soon as he took power.

“The disdain and neglect the present administration has shown the traditional institution in the state is ill-advised. They should be supported and partnered with,” he said.

But aside from the royal rural security initiative, elected Governor Ize-Iyamu would scale up security all over the state, stressing that the present wild-spread insecurity was scary and unacceptable.

“My administration will commence steps to rebuild the state security infrastructure.”

He added that though Governor Obaseki ramped up his monthly security vote to over N700 million, he only supported the Police with N5 million, an amount he dismissed as a tiny drop in a mighty ocean.

“This is something,” he pledged, “my administration will immediately scale up significantly. Apart from this, we are also going to explore other areas of sustainable funding for the Police and other security agencies in Edo State.”

He stressed that there was a link between partnering with Edo traditional rulers and boosting rural security, particularly to gather intelligence and prevent crime.

In the post-September 19 Edo government to come, Ize-Iyamu said security was a serious goal, for which he would lead every segment of the state to work for, and in unity achieve.

That was why, he concluded, September 19 must be liberation day, when Edo will witness a new lease of life.