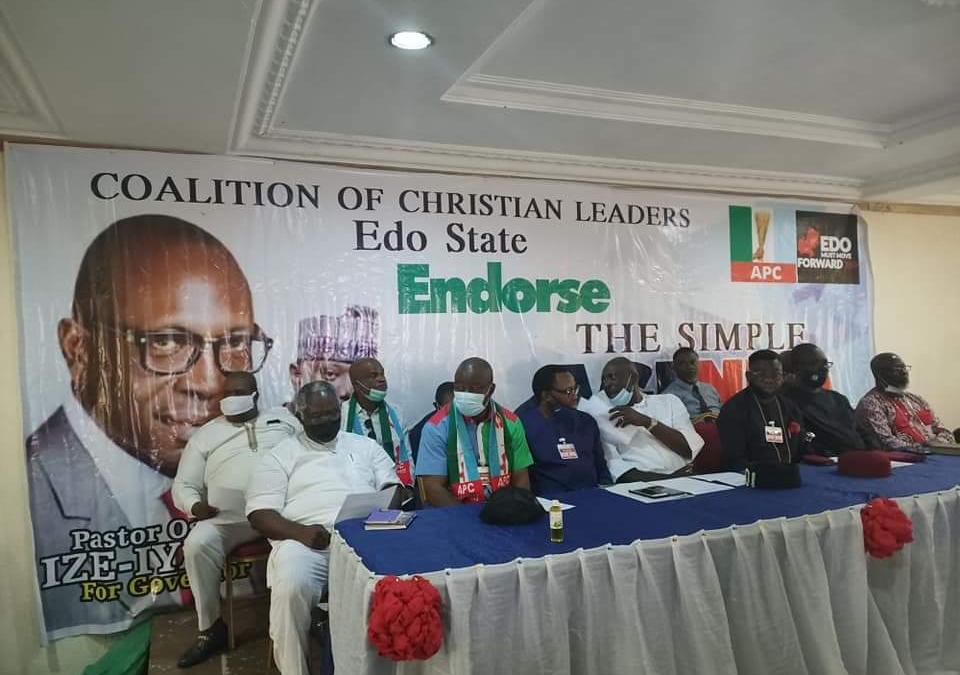 The election bid of Pastor Osagie Ize-Iyamu, the Edo APC candidate in the Sept. 19 Governorship election, gained a major boost on Monday with a weighty endorsement from a powerful coalition of Christian Leaders across Edo State.

The coalition, comprising of church leaders cutting across various Christian denominations in Edo State, announced the endorsement of the APC candidate at its one-day conference in Benin city.

It said the endorsement was informed by various meetings in which the church leaders critically examined the interest of God in relation to the election and concluded that Ize-Iyamu’s SIMPLE agenda manifesto is a plan that will place Edo State and her citizens on the path of development.

In a communique released at the end of the conference, the church leaders encouraged Christians in Edo State, notwithstanding the denominations, to vote massively for the candidate of the All Progressives Congress, Pastor Osagie Ize-Iyamu, and his running mate, Mallam Gani Audu at the polls, while also calling for non-violent elections.

In his welcome address at the one-day conference, Rev. Jeff Iyonawan said a politically disintegrated or disengaged church is a disservice to the kingdom of God as you cannot influence a system from the outside.

“Before now, we have been told to stay away from politics and government because it is froth with corruption. Whereas, a politically disintegrated or disengaged church is a disservice to the kingdom of God. You cannot influence a system from outside, you need to get involved.”

He called on leaders of the church to take on their responsibilities as spiritual architects and co-laborers to lay a solid foundation by encouraging members and followers to actively participate in the election.

The endorsement of Pastor Osagie Ize-Iyamu by interdenominational church leaders across the three senatorial districts of Edo State is expected to propel him in the race and strengthen his lead. His stream of endorsements offers a sharp contrast to the continued resignations and growing abandonment of the incumbent Governor Godwin Obaseki.